Coconut Rum Banana French Trench with a scoop of vanilla cookie dough on top to get the party started early. It’s like having dessert for breakfast. 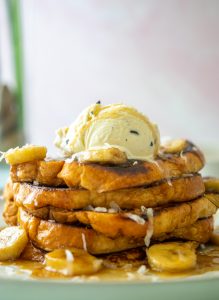 This recipe is my favorite and I have been making this for a while now. I make them in different variations. You will love this. I used Coconut milk, coconut shavings for garnish, Banana, and rum to make the caramel sauce and brioche bread to make the toast because it’s my favorite. 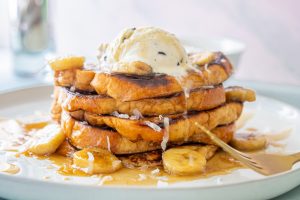 What kind of rum to use in Coconut Rum French Toast?

I used Appleton Estate Signature Blend Jamaica Rum to make this ingredient. I contemplated on Wrap and Nephew White overproof rum but I thought that would be a little bit too aggressive. So, I choose dark rum because it’s sweeter, smooth, and more flavorful.

What kind of bread to use for French Toast?

The type of bread that is most commonly used in French Toast are Brioche, Challah, and Baguette. What do you like? for my preference I like when my bread is not hard and has flavor hence, I go with brioche because it has everything I want. 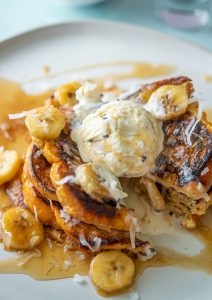 I used a Keto Ice Cream Cookie Dough sold at Aldi. It wasn’t too sweet and I didn’t feel guilty adding it and having it.

This sauce substitutes maple syrup. Who wants plain syrup with this awesome Coconut Banan French Toast Recipe? I used butter, sugar, and spice to make it nice and then add rum and bananas in the end. I did not want to lose the flavor of the rum with the heat and also did not want to overcook the bananas. 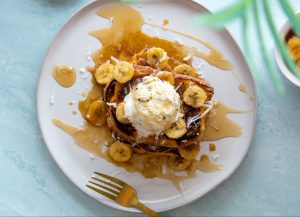 CHECK OUT THSE AWESOME RECIPES FROM US 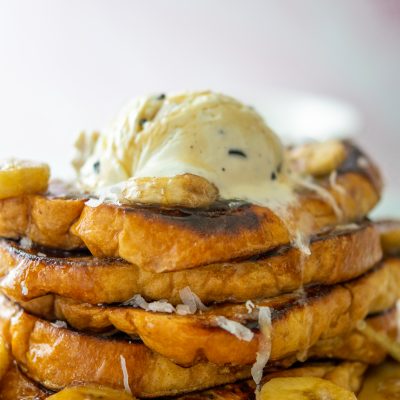 Eggs Benedict is perfect no matter what variation.

What happens when Caesar takes a trip to the Carib 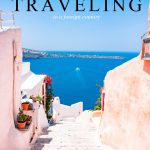